Studies of the 1960s underground press in the U.S. typically place front-and-center organs such as The Berkeley Barb, The East Village Other,  Detroit’s Fifth Estate, Chicago’s The Seed, and Atlanta’s Great Speckled Bird.  And why not?  Those were leading the way.  Each really blossomed following 1965 and drove the development of an underground- and counter-culture for the remainder of the decade.

My interest, however, is in the larger national infrastructure making up the underground press, the national syndicate Liberation News Service (LNS) and its connection to and relationship with hundreds of college newspapers across the country.

By the time Frank Zappa graced its cover in the opening days of 1969, the student-run newspaper, The Acorn, had become  a vehicle  for the  countercultural  1960s… 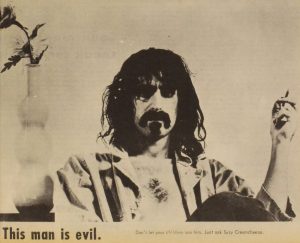 Run entirely by the students, the college newspaper joined the national syndicate for the underground press, the LNS.  From that point, its content turned sharply toward more political and provocative coverage. 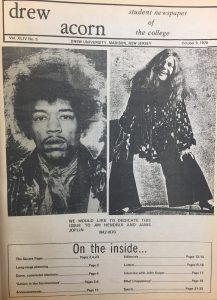 At right is the newspaper’s front page tribute to counterculture and rock music icons Jimi Hendrix and Janis Joplin following their deaths. 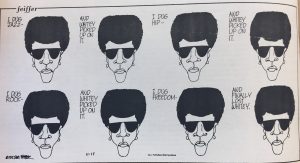 Cartoonists whose work would make them famous became routine content for the newspaper, some of it taken from LNS news packets sent to member papers in the underground circuit.  Below are examples from R. Cobb, Jules Feiffer and R. Crumb. 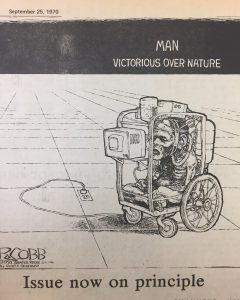 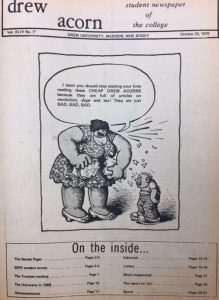 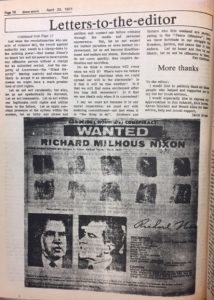 The student president, Bob Smartt, invited staunch segregationist and Dixiecrat Senator Strom Thurmond to campus, and then students proceeded to heckle and pelt him with popcorn relentlessly, provoking his ire.  Below is the image from the newspaper of students holding up “BIGOT” signs. 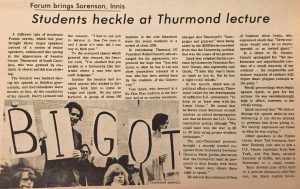 Below, famous sixties activist and Yippie Jerry Rubin speaks to a crowd of Drew students.  He later joined the students in an anti-Vietnam War march from Madison to Morristown.  Rubin’s appearance on the campus and participation in the march coincided with Acorn editor Ken Schulman’s intentionally provocative political leadership and promotion of Rubin including a lengthy review of his book, Do It! in the newspaper’s pages.